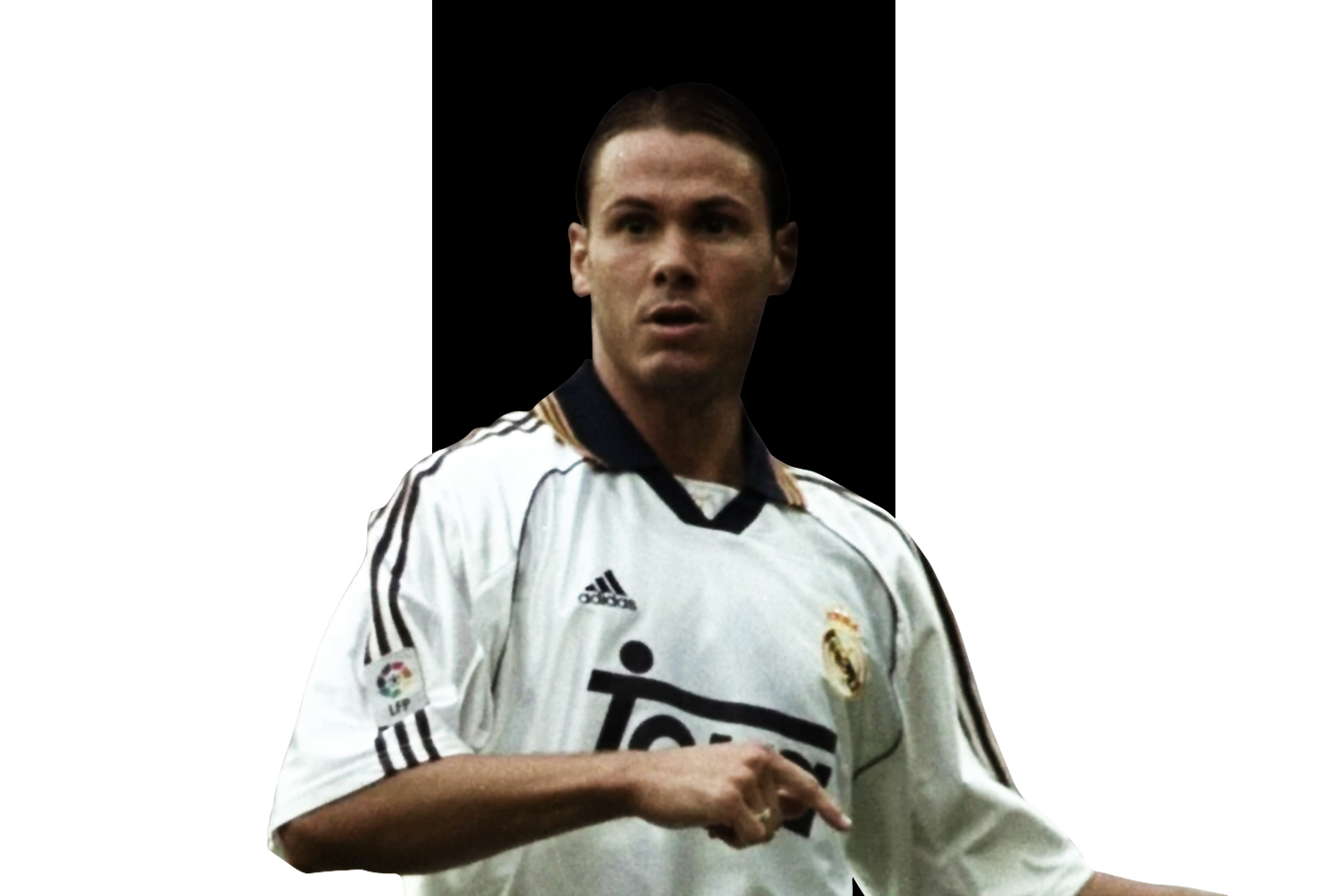 One more time here to talk about a classic of the Spanish league, I am not short if I say that the Argentinean is one of the best midfielders that football has ever known, Fernando Carlos Redondo.

Redondo began his professional career at Argentinos Juniors, where he stayed for 5 seasons before crossing the pond to reach the Spanish League, stopping at Club Deportivo Tenerife at 21 years of age to make a name for himself in the championship at a modest club, but which was gradually building a competitive team. His best moments in Tenerife came between 92 and 94. In a few years, Tenerife had gone from fighting to stay in the category to fighting for European places, it is not surprising if we look at the players that were in those squads, such as Redondo himself, Chemo Del Solar, Ezequiel Castillo, Pier, Pizzi, Dertycia, Diego Latorre or César Gomez.

With the arrival to the bench of the also Argentinean Jorge Valdano, Redondo lives his first experience in European competition thanks to the fifth place obtained in the league that gave him the ticket to Tenerife to play the UEFA Cup in the next season. Auxerre and Olympiakos succumbed before reaching the round of 16 and were later eliminated by Juventus of Turin.

In the summer of 1994 everything changes for Redondo. The coach Jorge Valdano is hired to direct Real Madrid and the first request he makes is to get the transfer of the Argentinean midfielder. Said and done, Fernando Redondo, in full sport and erected as a great leader, becomes a player of Real Madrid on June 6th 1994 (the day he turned 25).

His adventure in Madrid didn’t start in the best possible way as he was seriously injured in pre-season playing the Euskadi tournament at San Mamés by a Mendiguren tackle. The atmosphere was hot and coming from far away, last season even in the ranks of Tenerife, Redondo made a tackle on the star of the Bilbao team Julen Guerrero and since then the fans were on top of Redondo. That climax of excitement spread to the pitch and in the second half of the game Mendiguren hunted down Redondo causing him to partially tear the inner ligament of his left knee. Summary of the altercation, two months off for the middle without even having started the season.

But the misfortunes of that first season would not end there for Redondo, in December, Real Madrid and Redondo play at the Santiago Bernabéu the match corresponding to the 14th fixture of La Liga against Real Oviedo and, at the end of the match, with a score favourable to Real Madrid 2-0 (goals by Raúl and Laudrup), Slavisa Jokanovic hunts Redondo in the knee, this time the right one, to leave him out of the game for another 2 months. A lot of dust raised that throw, with Oviedo players accusing Redondo of having provoked Jokanovic, but when Redondo was asked about such statements, he did not want to answer and accepted the entry as football stuff. Those were his values, what happens on the pitch, stays on the pitch. Even with his 4 months total leave that first season, he would be proclaimed League Champion.

The following season was not very good either for Redondo on a personal level or for Real Madrid on a collective level, obtaining the sixth place in the classification and staying out of European positions.

This could not remain so, and in 1997 Real Madrid underwent a transformation that would lead it to dominate Europe for a few years. Fabio Capello arrives at the bench that season 1996-1997 and Redondo, already at full capacity, is a key piece in the achievement of the League title. A new season, 1997-1998 with a new coach, despite having won the League, Fabio Capello leaves the ship and arrives, from Tenerife – as Valdano and Redondo a few years earlier – Jupp Heynckes. That season the team suffers a metamorphosis of difficult explanation, in the League the results don’t arrive, but in Europe, the team transforms and they arrive until the great final where they would fight against Juventus and they would obtain the awaited “Seventh”, what earned them the ticket to play in Tokyo the final of the Intercontinental Cup against Vasco da Gama. Redondo thus added the Intercontinental Cup to his resume by winning 2-1 in the famous final of Raul’s Aguanís.

Two years later, in the year 2000, Redondo was considered a world star and the famous “Old Trafford heel” will remain in our eyes forever. In the quarterfinals of the Champions League, Real Madrid would face the current champions, Manchester United. 0-0 at the Bernabéu and it was time to visit the theatre of dreams at Old Trafford where the world would witness Redondo’s iconic play. He started from the left to almost break away from the corner of the Mancunian defender Berg with a sublime heeled dribble managing to get down to the area and there, raising his head as if everything that was happening was in slow motion, he put the ball in the mouth of the goal so that Raúl only had to push it into the net. Real Madrid won the match 2-3 and at the end of the match even the Manchester United coach, Sir Alex Ferguson, said these words:

“Redondo was the key player that night, all the balls fell to him and he didn’t lose a single one, it seemed he had a magnet”

Real Madrid and Redondo would reach the final against Valencia and win the 8th Champions and second in Fernando’s curriculum, in addition, he would be named the most valuable player of the tournament by the UEFA. But in this apotheosis end of the season nobody could expect what was going to happen next. With two Champions League titles in three years, Lorenzo Sanz called presidential elections in the belief that he would easily win re-election, but sometimes two plus two does not make four, and by surprise, Florentino Pérez won the election and one of his first decisions was to transfer Fernando Redondo to AC Milan.

This news fell like a bomb among the Merengues’ fans, who idolized (and still do) the Argentine player, so much so that the day the parties were meeting at the Santiago Bernabéu to close the deal, there were even protests against the sale to the cry of “Figo no, Redondo sí”. The fans could not understand how they were going to let the genius from Buenos Aires escape, but it was so, on July 27, 2000 Real Madrid issued an ugly statement confirming the deal for 3,000 million pesetas for Fernando Redondo to Milan, accusing him of being the one who wanted the transfer. Redondo, on the other hand, summons the press to give their version of the facts.

Anyway, a sad end to the relationship with accusations in both directions about who was at fault in that transfer that ended up with one of the most iconic players Real Madrid has ever had in Berlusconi’s Milan.

Many people tried to sell the idea that selling a 31-year-old player for 3,000 million pesetas was a good business and more, when they saw what happened to the player as soon as he arrived in Milan. A real ordeal of injuries meant that he was unable to play a single game in his first two seasons, but it is precisely in the worst moments that one can see the greatness of a person and, hurt by not being able to play and demonstrate his talent, he decided not to charge until he had recovered. Years later, Redondo made public the ordeal he suffered during those years:

“They would put me in the operating room, put my leg up, drain it of blood with a tourniquet and give me drugs”.

“The risk was that if any of it went to the heart, it might have a problem. They would let you do it six times maximum and I did it five times and that way I could overcome the pain threshold and work on rehabilitation”.

He would reappear in the 2002-2003 season, and although he couldn’t play more than 19 matches between the League, the Cup and the Champions League, fate, always capricious, wanted Redondo to be able to return to his home, the Santiago Bernabéu, and say goodbye as he deserved to his fans in a pitch that was packed with 76,000 people cheering and applauding The Prince every time he touched the ball.

One more season in Milan with only 14 other matches in total made Redondo decide to retire from football in 2004 with a background of 2 Leagues, 1 Supercup, 2 Champions League and 1 Intercontinental Cup as his greatest achievements in Real Madrid, and with 1 Scudetto, 1 Coppa, 1 Supercoppa, 1 Champions and 1 European Super Cup with Milan, although given his few appearances in the Lombardy team, these titles may be somewhat residual.

I would also like to point out the surprisingly low profile he had in the Argentine National team, with only 29 appearances. In spite of being declared the best player of the 1992 Confederations Cup that he won with Argentina, of winning the America’s Cup in 1993 and participating in the World Cup USA 94, his quarrels with the future Argentinean coach, Daniel Passarella, deprived the Albiceleste of enjoying more than one player of his class.

Fernando Carlos Redondo, a midfielder capable of supporting the team on his own, a titan from whom no one could steal a ball, with an elegance of touch and unusual ball handling. A player of legend.