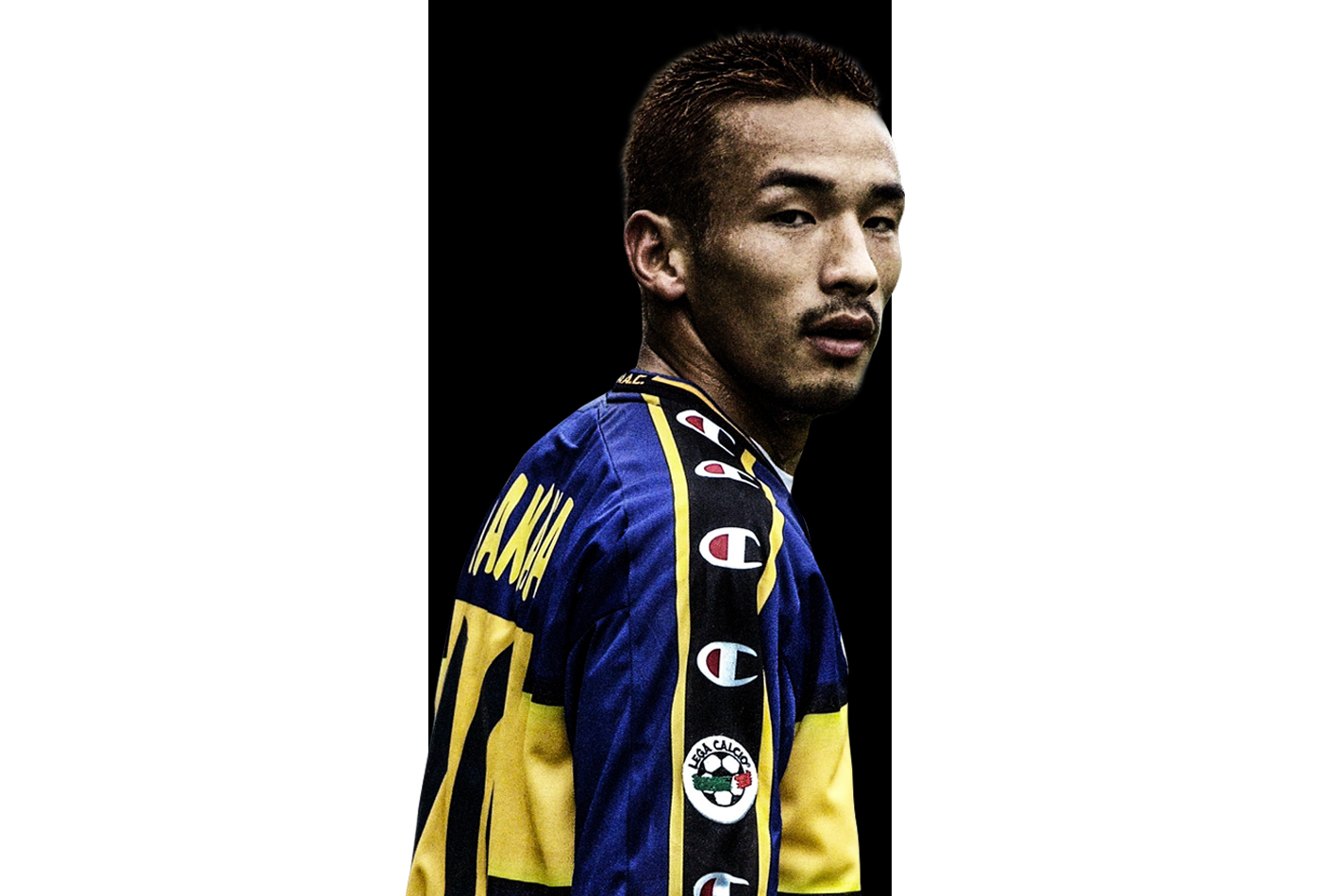 Hidetoshi Nakata… the samurai… the “Japanese Beckham”… fashion icon and football star in the 2000’s not only for his quality but also for being one of the few Japanese players who managed to make a name for himself in the European high level football scene.

His professional career began in 1995 when he signed up at the age of 18 for the Bellmare Hiratsuka of the J. League where he gained prominence each season, being declared the best Asian player in 1997 and 1998.

It is in this year 1998 when Nakata’s career takes off definitively, he is called to play the World Cup of France 98 and thanks to this showcase he manages to jump to Europe… the always complicated Serie A welcomed Hidetoshi Nakata, who signed for the recently promoted Perugia.

But the adventure couldn’t have started better for Nakata on an individual level, scoring 2 goals against Juventus in the first match of the league and making a magnificent first season overall.

By then Nakata was a true idol in his country and there were always Japanese fans and reporters following him in every match.

The 1999-2000 season – his second season in Italy – started just as well, with 15 games played and 2 goals scored in the first half of the competition. It is at this time, with the opening of the winter market, that Fabio Capello’s Roma enters the scene and launches into the recruitment of the Japanese player.

By means of 21 million euros, Nakata set off for the Eternal City to wear the Roma giallorossa shirt of Totti, Montella, Aldair, Cafú…

If Nakata’s popularity in Perugia was great, with his arrival in Rome everything shot up. From Japan, travel agencies sold holiday packages with Nakata as a claim, and thus, league day after league day, dozens of Japanese fans filled the stands of the Olympic of Rome cheering their idol.

As soon as he landed in Rome Nakata became an important player, but it would be in his second season where he would achieve his greatest achievement as a professional player by winning the Scudetto.

In that 2000-2001 season Roma finished shoring up the great team they already had with the acquisition of one of the best strikers ever, Gabriel Batistuta, and although it is true that Nakata lost prominence in comparison to that first season by becoming many times a refreshing player, the league title will always be associated with him as the transcendental match against Juventus, and with Roma losing 0-2 (goals by Del Piero and Zidane, almost nothing), the good one of Fábio Capello replaces the Capitano Totti to give entrance to Nakata, who scores a true goal to place the 1-2 with 30 minutes left to the end of the match and generates the tie in the minutes of discount thanks to a very strong shot from outside the area that repels the goalkeeper juventino Van der Sar but Montella, in acrobatic position manages to score the goal with which at the end it would serve to proclaim itself champion of the Scudetto.

At the end of this season, and with the Scudetto under his arm, Roma transferred Nakata to Parma that was starting to get rid of its stars (that year they transferred Buffon, Thuram and Sérgio Conceição).

That first season in Parma ended with the Coppa d’Italia in their showcases, but from here Nakata was never the same player, one more season in Parma and then on loan to Bologna, arrival at Fiorentina and a last stop at English Bolton Wanderers.

After participating in the 2006 World Cup in Germany – his third World Cup appearance after France 98 and Korea and Japan 2002 – Nakata announces his retirement from the world of football at the age of 29.

It is only over the years that we realise what Nakata represented. I particularly think that because of the pressure he was under, he made the decision to retire from football at such a young age, because in the end, Nakata was not just a football player – a great football player, I would say – he was a marketing product, he was an ambassador for Japan and Japanese culture around the world.

In the end, everything has its time… the Nakatamania is gone… the Samurai is eternal.