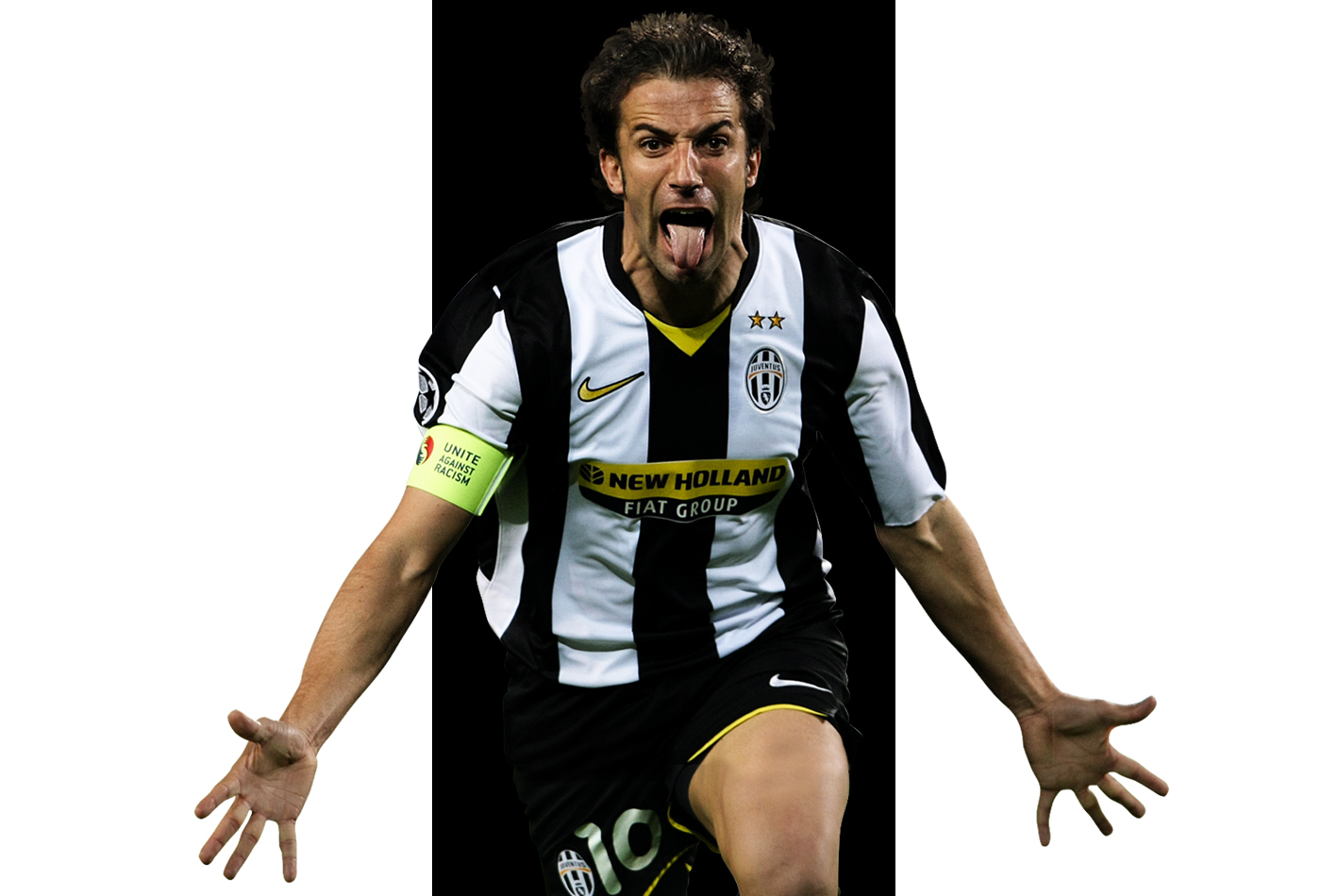 Alessandro Del Piero, also known as Pinturicchio, was one of the key players of the 1990s and early 2000s and one of my favourite players.

He was not a striker as such although he could play as a false 9, he was a scoring midfielder with so many resources that, in fact, today he is still the top scorer in the history of the Vecchia Signora.

It is very difficult to imagine Del Piero without the Juventus shirt, not in vain he spent 19 seasons in Turin, but the truth is that Del Piero started his football career in Serie B at Calcio Padova, where he stayed for 2 seasons before being transferred to Juventus in the 1993-1994 season.

That first season at Juve he alternated between the spring team and the first team, where Italian coach Giovanni Trappattoni gave him the alternative in Serie A on September 12, 1993 replacing Ravanelli in a match against Foggia that would end in a 1-1 draw. A week after his debut, in a league match against Reggina, he would score the first of his 290 official goals wearing the Bianconeri shirt.

In the following season there was a change in the bench, Marcello Lippi arrived to replace Trappattoni, and Del Piero collaborated a lot in the achievement of the Scudetto and the Coppa that would win that year and, from there, to the season of his consecration as the star of the team.

In the 1995-1996 season, Juventus transferred Roberto Baggio and Alex Del Piero became the team’s reference point and, although the decision to transfer the former Golden Ball winner in 1993 was not well received, time would prove them right as that season, although they would end up in second place in the league, they would win the Champions League against Ajax in the penalty shootout.

The following season was again successful for Juventus and Del Piero. On 26 November 1996, at the National Stadium in Tokyo, Del Piero scored the winning goal against River Plate in the final of the Intercontinental Cup, then came the resounding
6-1 and 3-1 double victory over PSG of Raí in the European Super Cup, with Del Piero scoring a double in this second match (at that time, the European Super Cup was played over two legs between January and February) and they also ended up winning the Scudetto. They could not put the cherry on top of the season by losing the Champions League final against Borussia Dortmund 3-1, although we will always remember the heeled goal that the wizard Juventino gave us.

Season 1997-1998, Juventus revalidated the Scudetto and Del Piero contributed with 21 goals to that success, moreover, they reached their third consecutive Champions League final, this time the rival would be Real Madrid at the Amsterdam Arena, and, again, another opportunity that escapes Pinturicchio to extend his record in the highest continental competition, although he would end up being the top scorer of the tournament with 10 goals and left us with games to remember, such as the first leg of the semi-final against A. S. Monaco of Barthez, Henry and Trezeguet, where Juventus would win 4-1 and Del Piero would score a hat-trick.

If Del Piero was constipated Juve was suffering, so it was not surprising the suffering of the team when they had to get used to play without him for 9 months because of a serious injury in his left knee, so that season 98-99 was null and void and in the following season, the one of his return, he never got regularity nor looked like the player we were used to, besides he would lose with the Italian National Team the final of EURO 2000.

In the 2001-2002 season he won a new Scudetto, as in 2002-2003, and this season he also played a very important role in the Champions League to reach the final, where he lost his third final, this time against Milan in the penalty shootout.

Del Piero has always been a key player, but something went wrong when Fabio Capello took over Juventus in 2004. It was two seasons visiting the bench in many occasions due to the little feeling with the coach, who preferred Zlatan Ibrahimovic in the eleven. The two years with Capello were the worst thing that could happen, on the one hand, despite their many substitutes, Juventus would win those two years the Scudetto, but later would be removed from the showcases by the scandal of Calciopoli, and in 2006 he would be called up for the World Cup in Germany where he wouldn’t have much of a role, even so he scored a great goal against the hosts in the semifinals and although he only played the last minutes of the final, he came to score his penalty in the fatal shootout and help Italy become world champions.

Due to the Calciopoli scandal mentioned above, in addition to taking away those two league titles, Juventus were relegated to the Serie B, and Del Piero was one of the few players who remained in the team, along with Buffon, Camoranesi, Trezeguet and Nedved. Pinturicchio contributed to the promotion to Serie A with 20 goals, being also a capocannoniere, his idyll with the goal would not end and already in the following season, 2007-2008, Del Piero would also be crowned for the first time in his career as a capocannoniere in Serie A getting 21 goals.

Year 2008 and Del Piero returns to the maximum continental competition, in the group phase Juventus visited Real Madrid in the Santiago Bernabéu and Del Piero, at almost 34 years old (he would turn 4 days later), brings out all his magic in the best possible showcase. I remember that match perfectly, I was watching it on TV and every minute that passed I admired more what he was achieving, he alone led Juventus to win the match by 0-2, both goals with his signature, the second one a direct foul, one of his specialities. I think that was Del Piero’s last great show, the Bernabéu audience thought so too and when he was substituted, despite the fact that he had massacred them, he gave them a standing ovation full of admiration and respect. Del Piero himself recalls that moment in an interview in which he says:

“I was surprised. We were in a difficult moment, with many injuries, and we went there to see what was happening. We played a great game, I scored two goals and at the end, when the coach changed me, I was very concentrated, but at one point I said: Are these people standing up and clapping for me? It was a special, incredible moment. In football you play to win, but also to be enjoyed by the fans. And when these situations happen, and not with your own fans but with those of the rival team, it’s much better. And more so against Real Madrid and at the Bernabéu, which is a temple. It was unique, like winning a trophy for me”.

Del Piero would play for Juventus until the 2011-2012 season when he would bid farewell to the club by winning his sixth Scudetto. In his last match played at Juventus Stadium against Atalanta, he would score his last goal as a Bianconeri player and go out on a high, acclaimed by his fans, although in reality his last official match would be a week later in the Coppa final against Napoli, with Juventus losing, a bitter end for a player of legend with a record of 6 Scudettos, 1 Coppa, 4 Super Cups, 1 Champions League, 1 Intercontinental Cup, 1 European Super Cup and a World Cup, all this without counting what could have been if he had not lost 3 Champions League finals and a European Cup final.

At the end of his career at Juventus after 19 years and 705 matches, Pinturicchio decided to make his last appearance in exotic places. He spent two years in Australia with Sydney F.C. and one last season with Delhi Dynamos in the Indian Super League where he would retire from the pitch in 2014.

Anyway, one of the best and most elegant players I have ever seen, a legend who, as one of the Juventus mandates says, was one until the end… Fino alla fine.