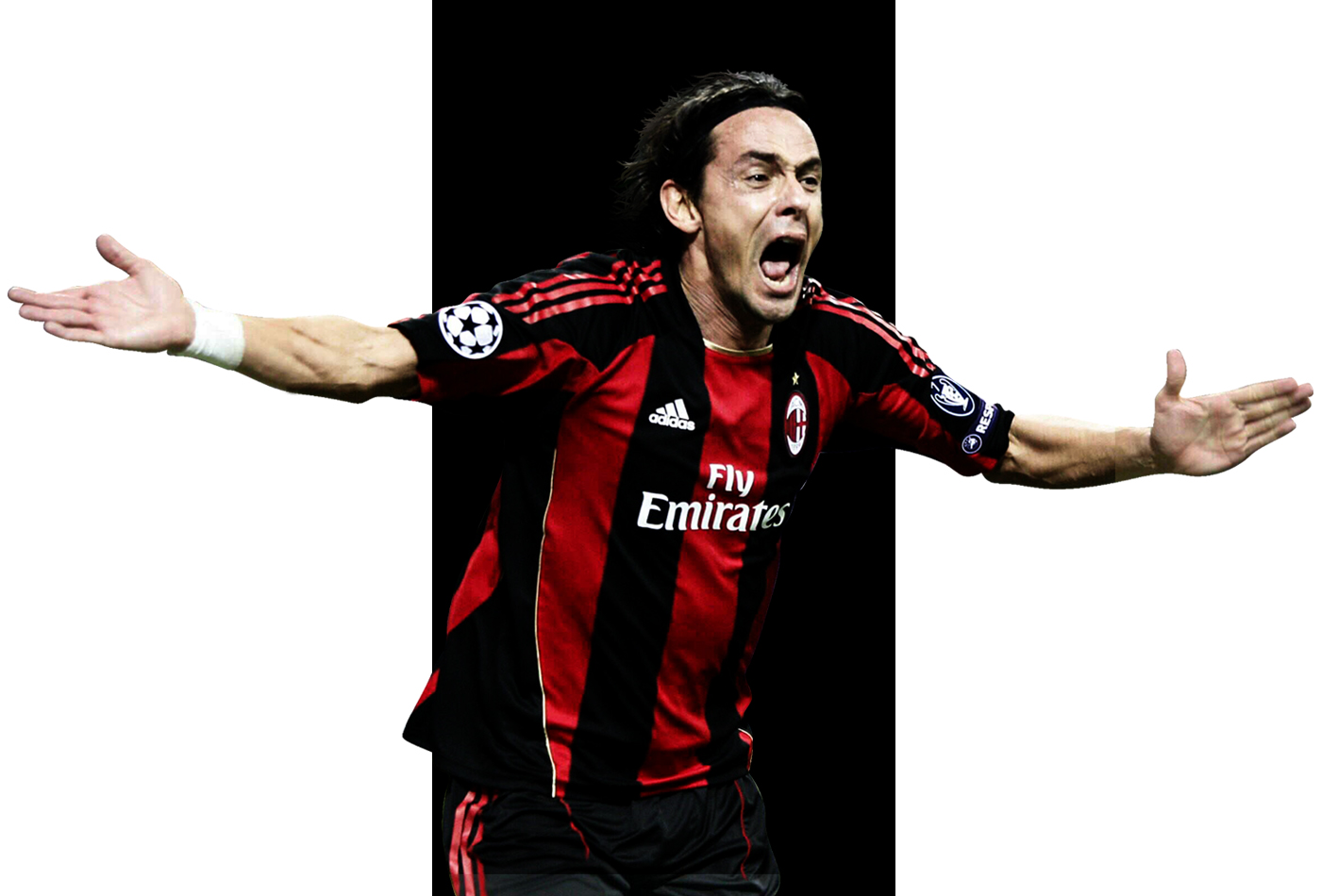 New entry to meet, this time, one of the strikers who has impressed me the most, Filippo Inzaghi, the elusive Italian striker who drove a thousand and one defenders crazy.

For me, he embodies all the values that I like in a player: claw, courage, pundonor, picaresque… he was not particularly skilled with the ball at his feet, but that’s because he didn’t need it either, he was where and when the occasion required him to do what he knew best… to score goals.

I remember seeing Inzaghi for the first time when he was playing for Juventus, but until he got there he had to forge his way into the elite in modest teams. He began his career at Piazenza in Serie B. After one season, he was on loan twice, the first time to S.C. Leffe (now Albinoleffe), and the second time to Hellas Verona, before returning to Piacenza and making the definitive leap into Serie A with Parma in the 1995-1996 season. It is curious that in that great Parma of the 90’s the figure of Filippo Inzaghi passed somewhat unnoticed by the public at large, but in that one season he was there surrounded by great players such as Gianluigi Buffon, Néstor Sensini, Fábio Cannavaro, Dino Baggio, Hristo Stoichkov and Gianfranco Zola, he had a lot of prominence, so much so that, at the end of the season, Atalanta paid a good sum for his services and it is there that Inzaghi explodes, scoring 24 goals and becoming the capocannoniere.

This fact did not go unnoticed by Juventus and it launched its services for almost 15 million euros. After leaving for the team for a year, here he finally found stability by staying for 4 seasons in which he won 1 Scudetto, a Supercoppa and an Intertoto cup (a competition played in the summer that gave access to play the UEFA Cup).

In these four years the thorn in his side was the Champions League. In the 1997-1998 season he had it very close, almost caressing it, but when everyone was giving Juventus the title, Real Madrid beat them in the final which was the seventh European Cup for the Merengue team. On a personal level, Inzaghi made a great Champions League scoring a total of 6 goals.

In a move between two of the Italian giants – a very common occurrence in Calcio – Inzaghi was transferred from Juventus to Milan in the 2001-2002 season, a club that can be said to be his heart, and where they were able to make more and better use of his “talent”.

In 2003, at the Old Trafford Stadium in Manchester, he would achieve with Milan what he could not achieve with Juventus, the coveted Champions League, and it would be precisely before his former team… the turns that life takes. Although Inzaghi didn’t have much relevance in this last match, he was very responsible for his team reaching the final by scoring a total of 10 goals in the competition.

He also suffered the bitter side of football in the form of injuries, he was chaining injury after injury for a long period of time, in the 2003-2004 season he played only 14 games (although he won the Scudetto) and in 2004-2005 even less, 11 games. Milan reached the Champions League final that season with an unhappy memory of losing 3-0 at the end of the first half, which they would end up losing in the penalty shootout.

In the 2005-2006 season, already recovered from his multiple injuries, he was called up to play in the 2006 World Cup in Germany, where he would be proclaimed World Champion, and although he played a quite testimonial role by playing only 33 minutes in the whole competition, he gave time to score 1 goal.

Football always serves up revenge and this would come in the 2006-2007 season in a new Champions’ final, this time in the Olympic stadium in Athens, the rival, again, Liverpool, but with a difference, this time Pippo would be on the green and, the result… Milan’s victory by 2-1 with a double by Inzaghi. Thanks to this victory, Milan would play the Club World Cup held in Japan, winning in the final against Boca Juniors by 2-4 with another double by Pippo.

If there is a match that defines Filippo Inzaghi for me, it is the match he played against Real Madrid in the Champions League in the 2010-2011 season. In a crowded San Siro, Inzaghi, already 37 years old and with his team losing 0-1, jumped on the field in the 60th minute to revolutionize the match… he hit himself as soon as he came out with all the people around him, turned on the crowd and activated his team, and in a matter of 18 minutes he had scored two goals of his own, as an opportunist and goal hunter that helped him beat Torpedo Müller as the top scorer in European competitions with 70 goals. In the end, Real Madrid managed to tie the game in extra time, but that’s the least of it, Inzaghi gave us a few memorable moments.

A week after his exhibition, Inzaghi is again seriously injured and would not play for the whole of that season in which he would get his third and last Scudetto. Then, one last season in which he played just 7 league games, saying goodbye to the San Siro and his tifosi in the last league match against Novara and, as usual, he only needed a few minutes to say goodbye in the best possible way, scoring the winning goal. That match would not only be his farewell, other great players also said goodbye to the Lombard club, Inzaghi, Gattuso, Seedorf and Nesta left the last great Milan that is remembered.

Inzaghi would retire from football at the age of 38 with 2 Champions League, 3 Scudettos, 1 Coppa, 3 Supercoppas, 2 European Super Cups, a World Cup and countless goals and exhibitions of all kinds.