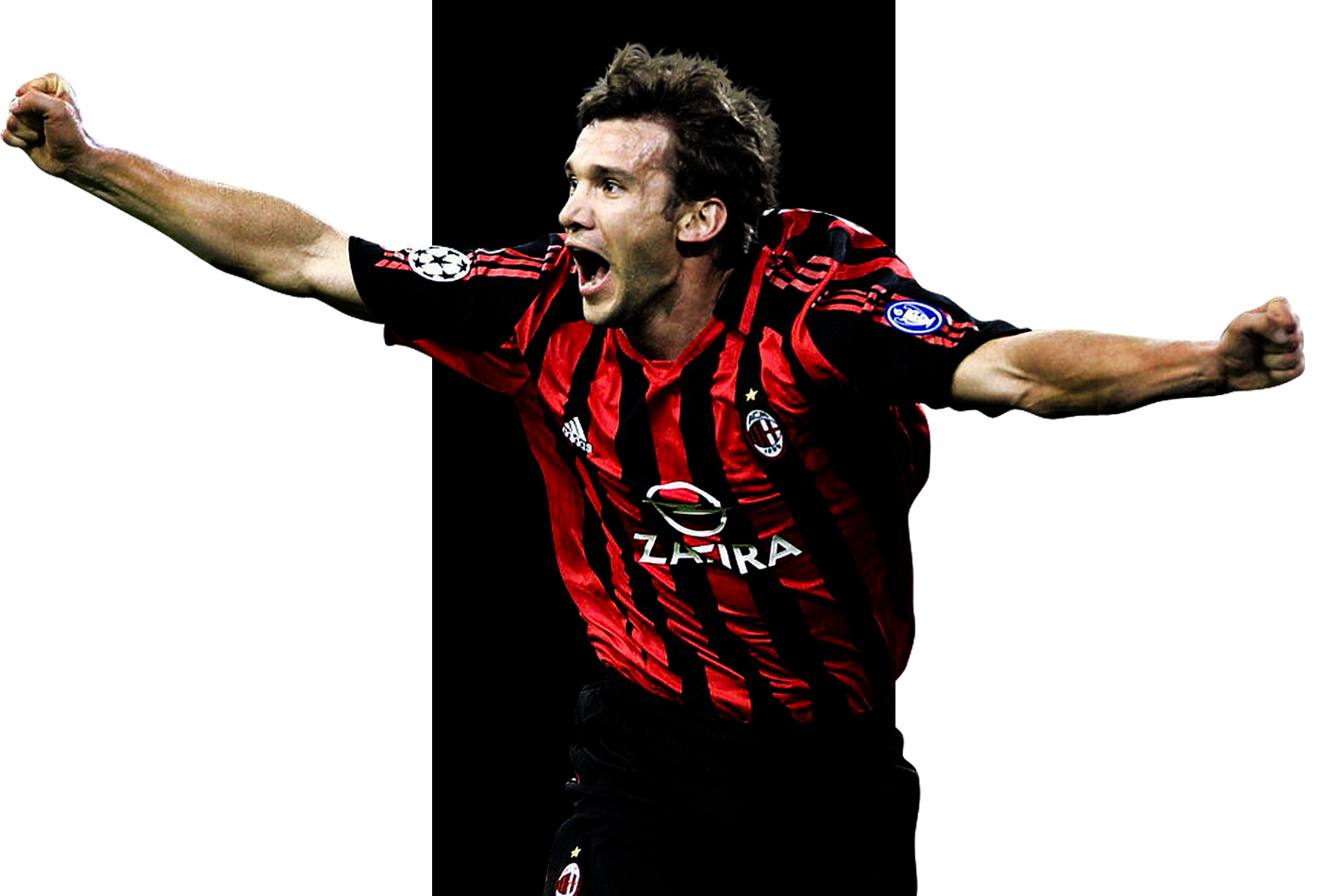 In the section on players, I don’t want to miss the opportunity to talk about another of the best strikers I saw in the 2000s, the Ukrainian Andriy Shevchenko.

Shevchenko’s story is linked to the terrible event of the Chernobyl nuclear power plant. His town was only 50 km away from the area exposed to radiation, so he and his entire family had to leave their home and settle on the Ukrainian coast, and it was here, at the age of 13 that he was discovered by a scout for the country’s top team, Dynamo Kiev.

After coming through the club’s youth ranks, Shevchenko made his first-team debut on the 28th of October 1994 in a match against Šakhtar Donetsk at the age of 18.

Shevchenko’s career cannot be understood – as the player has often said – without the presence of the coach who gave him his debut, the legendary Valeri Lobanovsky, who moulded the young Sheva’s character and turned him into a predator in the penalty area.

At the end of this first season he would win his first Ukrainian Premier League, scoring 1 goal in the championship (and 2 more in the Champions League), but quickly, in his second season, Shevchenko rocketed to 16 goals to help his team win their second consecutive League, as well as the Ukrainian Cup and his first appearance for his national team at the age of 19.

The following season was less profitable for the player in individual terms, scoring just six league goals, but he would add another league championship to his record.

We reached the 1997-1998 season, the season that would change Shevchenko’s career, the season when all the big clubs in Europe looked towards Ukraine, where he would win the League title (scoring 19 goals) and the Cup, forming a lethal duo with Rebrov, but above all thanks to his performances in the Champions League, where he scored 5 goals that season.

His exhibition at the Camp Nou against Barcelona in the group stage, scoring a hat-trick that secured Dynamo Kiev’s passage to the next round as group winners and Barcelona’s elimination from the tournament, will live long in the memory.

In the quarter-finals they would be eliminated by Juventus, but Andriy had already presented himself to the whole football scene.

Shevchenko’s last season at Dynamo Kiev was his best ever, winning his fifth consecutive league title, top scorer with 18 goals and his third cup, but as in the previous season, Andriy and Dynamo’s great success would come in the Champions League.

If the previous season was a success in reaching the quarter-finals having knocked Barcelona out of the competition, this season would far exceed expectations.

Dynamo Kiev, having had to play two preliminary rounds to reach the group stage, were able to reach the semi-finals, eliminating teams like Arsenal in the group stage and Real Madrid in the quarter-finals, where Shevchenko scored all three goals for his team overall and also became the top scorer in the competition (tied on goals with Dwight Yorke).

At the end of the season, pressure from the “big teams” for the player made his continuity in Kiev untenable and in the end, he was transferred to A. C. Milan for 26 M€.

Succeeding in Italy and being top scorer in Calcio is not easy and Shevchenko achieved it in his first season, scoring 24 goals to be crowned capocannoniere, but despite the goals scored that season and the following one, the titles did not come.

In his third season as a Milan player (2002-2003 season) and after having already scored 64 goals, Shevchenko managed to open his trophy cabinet as a rossoneri by winning the Coppa Italia and, much more important, the Champions League against Juventus in a penalty shoot-out, being also the great protagonist when he took the last and final kick, becoming a legend of the Milan team.

Shevchenko wanted to pay tribute to his mentor Lobanovsky, who died a year earlier, by carrying the Cup to his grave, a nice present that shows how close player and coach were.

The following season – probably Sheva’s best season with Milan – began with the European Super Cup title at the Louis II Stadium in Monaco against José Mourinho’s Porto, a match the rossoneri won 1-0 with Shevchenko himself scoring the goal.

Four months later, he joined the list of winners of the prestigious Ballon d’Or, beating Deco and Ronaldinho in the voting, becoming the third Ukrainian player to win the award after Oleg Blokhin and Igor Belanov.

To round off this impressive season, he won what would be his only Scudetto, proclaiming himself capocannoniere of the competition once again by scoring 24 goals.

Shevchenko started the 2004-2005 season doing what he knew best… hat-trick in the Italian Supercoppa against Lazio to win the title, while in the Scudetto he scored 17 goals to finish second, but that season will be a sad memory for the Ukrainian player.

Milan completed a great season in the Champions League reaching the final in Istanbul to face Liverpoool and he was a key player, scoring a total of 6 goals in the competition.

Many years have passed, but that final is still remembered as one of the most exciting and unpredictable, as nobody would have bet on Liverpool at half-time when they were 3-0 down, but in the second half everything changed and at the end of the 90 minutes the score was tied at 3-3, so after extra time, it went to penalties and, as in 2003, Shevchenko had the responsibility of taking the decisive penalty, but this time the coin fell on the other side.

His last season in Milan ends without titles. He scored 19 goals in Serie A and was again top scorer in the Champions League with 9 goals, being eliminated by Barcelona in a controversial elimination round when Shevchenko’s own goal was disallowed at the Camp Nou.

A bittersweet ending which, however, did not tarnish the career of the man who had become the club’s second all-time top scorer with 173 goals, as well as still being the top scorer in the derby della madonnina with 14 goals.

At the age of 30, he played in the 2006 World Cup in Germany with the Ukrainian national team, reaching the quarter finals and scoring 2 goals.

Shevchenko’s new adventure, after seven years in Italy, took him to London to join Russian tycoon Roman Abramovich’s Chelsea for a fee of 45 million euros, a huge sum at the time.

The arrival of the Ukrainian player along with the arrival of German Michael Ballack, added to the presence of José Mourinho at the helm, made Chelsea the great candidate to win all the titles and, although in his first season in London he managed to win the F.A. Cup and the League Cup, they are very poor trophies for Chelsea’s budget and squad.

The change did not sit well with Sheva, scoring only 9 Premier League goals in two seasons, a very poor record, far from that of a Ballon d’Or winner.

Before the start of what would be his third season with Chelsea and in view of the obvious failure of his stay in London, he returned home to Milan on loan for a season… but nothing remains of the player who left two years earlier. Shevchenko, with the number 76 on his back, will not score a single goal in Serie A in 18 appearances and will only score a total of two goals in the Coppa and Europa League competitions.

Milan did not execute their option to buy him, and the player returned to Chelsea… only to end up reaching an agreement with the club that would allow him to return as a prodigal son to Dynamo Kiev.

The club from which he was catapulted to stardom as a promising youngster welcomed him with open arms as a 33-year-old veteran with everything he had earned and taking his last steps in football.

In a less competitive Ukrainian league, now dominated with an iron fist by Šakhtar Donetsk, Shevchenko played three more seasons in which he won the Ukrainian Super Cup as his only title.

At the end of the 2011-2012 season, Shevchenko announced his retirement from professional football after the Euro 2012 tournament to be held in Poland and Ukraine, a farewell to football in keeping with his world class, at almost 36 years of age, scoring two goals in the tournament and being the top scorer in his national team’s history with 48 goals.

A Milan legend, one of the best strikers of the 2000s, his 721 appearances and 354 goals between all his clubs attest to that, an explosive striker who made the whole of Europe raise its head and looked to the East… From Ukraine with love. Andriy Shevchenko.