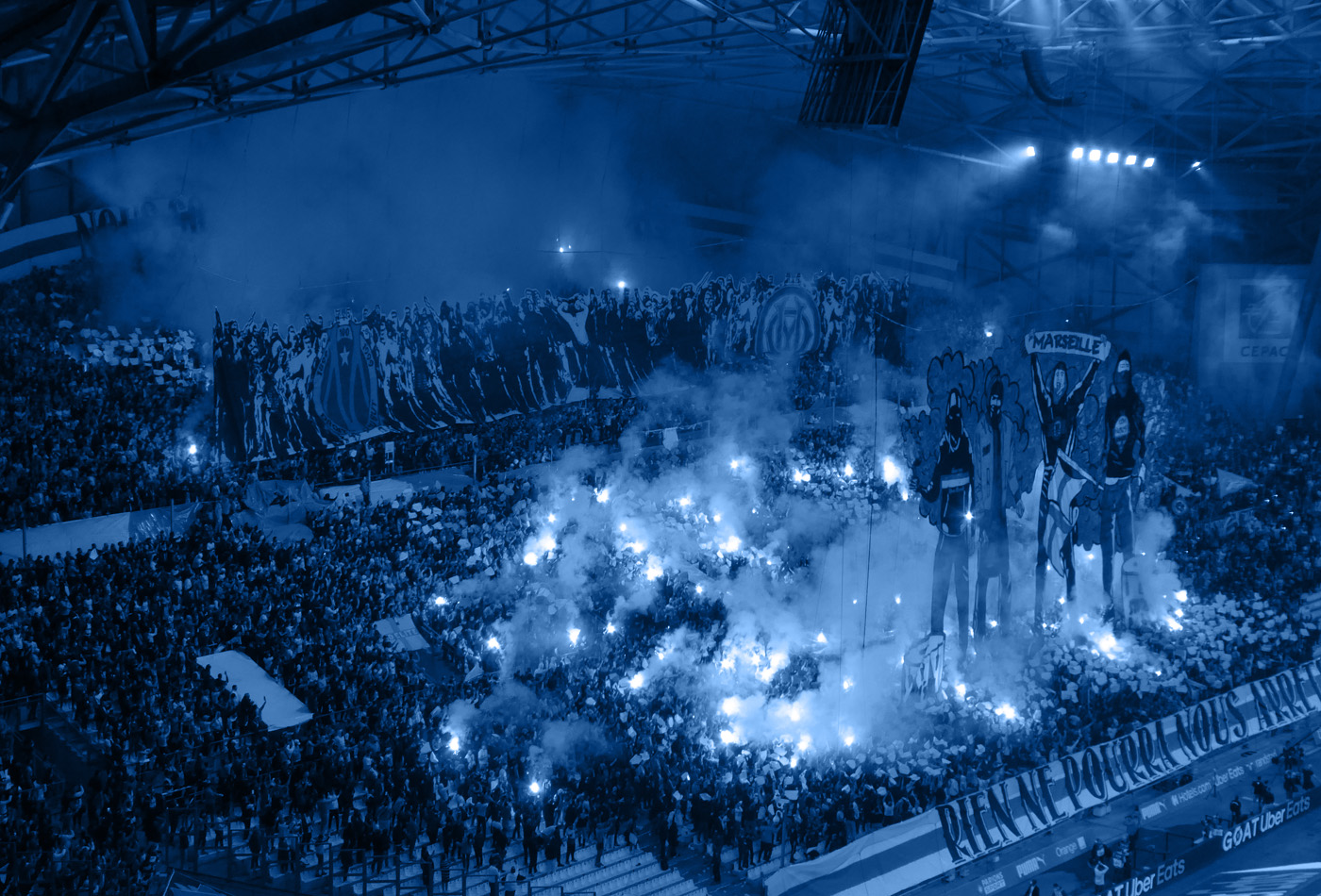 In the heart of Marseille, the gateway to the luxurious French Côte d’Azur or also called the port of North Africa, we find the Stade Vélodrome, home of a European champion, Olympique de Marseille.

Perhaps because I also belong to a neighbourhood with a well-defined idiosyncrasy, I always felt sympathy for OM and I always wanted to attend a match at the Vélodrome, and finally this year I was able to get tickets to see nothing less than the French classic, Le Classico, the biggest match you can see in France and one of the biggest in Europe.

I arrived in Marseille the same day of the match and the first thing that struck me was the atmosphere in the street, almost 100% of the people were wearing all kinds of Olympique merchandise. T-shirts, hoodies, scarves… anything was enough to identify you as an OM supporter, there was a special atmosphere, you could feel that it was a big day in the city.

As I arrived early in the morning, I booked a tour of the stadium to learn more about the details of this mythical place.

Inaugurated in 1937, its architecture was pioneering in France as it was the first stadium built in cement and it was not only used for football, it also had a cycling track (hence its name, ” Vélodrome”) as well as other sports such as rugby, gymnastics and boxing.

Originally, the Vélodrome was not Olympique’s home stadium, it was in 1960 that the team moved there and, after several renovations to host matches for the EURO in 1984 and the FIFA World Cup in 1998, it became the second largest stadium in France after the Stade de France with a capacity of 67,400 people.

The first thing I have to say is that the Vélodrome is impressive, when you arrive at its main entrance and look up you realise that you are in front of a majestic stadium, it is also an icon of the city, as its characteristic roof can be seen from many points of Marseille.

Once inside and after passing through a room where you can see many shirts from different years of OM, you arrive at a gallery where there are pictures of legendary players of the club… Ravanelli, Papin, Deschamps, Drogba, Boli… almost nothing.

Looking at those photos, reading the fragments of history that made those players true legends of the club, I couldn’t stop imagining them playing in that stadium, so I went to the end of this gallery that finally connected to the stands.

I will always remember the first time I saw a football stadium from the inside when I was just a little boy, the green colour of the immense grass (that’s how it seemed to me at that age), the immensity of everything around me at that moment… and here, when I looked out onto the stands of the Vélodrome, I felt something similar.

Not only is the shape of this stadium striking from the outside, but the inside is also impressive… two large stands, the Jean Bouin and the Ganay stands, with the north and south ends sloping backwards, make the acoustics of this stadium terrible for opponents.

After many photos and after passing through other areas of the stadium, such as the changing rooms or the press room, the tour came to an end and I could not wait until the afternoon to attend the match, but first I had to go back to the centre to eat something and recharge my batteries.

The crowds cheering OM had tripled in number… tides of fans singing in the streets or sitting on the terraces of the bars and, taking advantage of the fact that El Clasico was also being played in Spain, I decided to go into a pub to watch it surrounded by Marseilles fans.

End of the match, Real Madrid won and now yes, scarf and OM shirt on and with nightfall in the city, it was time to leave for the stadium… Le Classico awaited.

I thought that an hour and a half in advance would be more than enough to arrive and enjoy the atmosphere around the stadium, but when I got out of the underground what I saw left me perplexed.

Thousands of fans at the entrance to the stadium, flares in hand, forming choreographies, rockets in the sky, suddenly it looked like I had arrived in a war zone.

I have been watching big matches with a lot of rivalry, Real Madrid-Barcelona, Brugge-Anderlecht, River-Boca (I saw this match in Madrid, in the final of the Copa Libertadores, in Argentina it must be much more passionate) or Celtic-Rangers, but I had never experienced this atmosphere.

Marseille-Paris, north and south, new rich against the team of the people and pride of France (remember, the only French team until now European champion), all that and much more was palpable in the feeling of the people and, in addition, we added the extra motivation of coming from a year without people in the stands and with the arrival of Leo Messi to the Parisian megaproject.

I spent almost all the extra time I had to get into the stadium, so I went to my seat in the Ganay stand.

If the atmosphere outside the stadium was crazy, what was inside didn’t disappoint… the whole stadium was singing and shouting as the players were leaving, the tifos in the stands were unfurling, the flares were being lit… I couldn’t believe what I was seeing, it was a real spectacle, the stadium was a cauldron.

Tifos at the exit of the players. Images: feelthefutbol.com

The match was very entertaining, with emotion and passion… everything was cheered, everything was protested, the fans had two public enemies, Neymar and Messi. The Brazilian was not allowed to take corners because of the throwing of objects and the Argentinian even had to put up with a spontaneous person who jumped onto the pitch and went to meet him. In the end I think they were both overcome by the atmosphere.

At the end of the match, 0-0 on the scoreboard (with a goal disallowed to each team) and the feeling that I had watched something unique.

On the plane back home, reviewing the whole experience, I thought that the Vélodrome’s reputation as one of the hottest stadiums in Europe is certainly well deserved.

The atmosphere, the passion, the mystique… Marseille and OM won me over and from that moment on, they have had one more Marseillaise in their ranks.